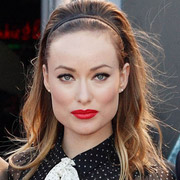 American actress best known for roles in movies such as TRON:Legacy, Cowboys & Aliens and The Change Up. On television she is well known for House and The O.C. ThompsonHotels had a brochure with a nice description of Olivia: “Wilde, 22, a formidable beauty with a 5-foot-7 frame, goddess bone structure, and hypnotic, feline eyes.”. Her agency also listed her at that m

Olivia Wilde stands tall at an approximate height of 5 feet 7 inches and her weight is around 55kgs. Other than this, there is no further information regarding Robyn’s other body measurement details like her chest-waist-hip

.  She was born on March 10, 1984 in New York City.
.  Her parents are Leslie Cockburn (née Leslie Corkill Redlich) and Andrew Cockburn.
.  Her mother is American-born and her father was born in London, England to an upper-class British family; he also .  later became a citizen of Ireland.
.  Wilde is the middle child, having an older sister, Chloe Cockburn, and, a younger brother, Charlie Cockburn.
.  Her ancestry includes, English, Irish, Scottish, German, and Manx.

Below is the chart showing the comparison of Olivia Wilde's height with other similar heights. The selected celebrities for comparison include Selena Gomez, Josh Gad, Amy Nuttall, Devyn Simone.