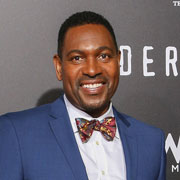 American actor best known for roles in movies like Forrest Gump, Fences and Con Air. On tv he can be seen in Boomtown and the final season of 24. I read in Zap2it he claimed “I’m six-three, and it’s a little rough on a guy my size”

Below is the chart showing the comparison of Mykelti Williamson's height with other similar heights. The selected celebrities for comparison include Stuart Martin, Lindsay Kay Hayward, Melissa Sagemiller, Devon Sawa.