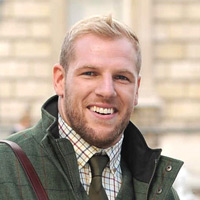 English rugby union player, who has played for Wasps and won over 75 caps for England. He said in the Express in 2013 “I am 6ft 3in tall and weigh 19st so some dinky little soft top really wouldn’t work for me. I am a big man and need a big car.”

Below is the chart showing the comparison of James Haskell's height with other similar heights. The selected celebrities for comparison include Lorne Greene, Seth MacFarlane, Robert Sheehan, Kelly LeBrock.