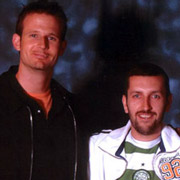 American actor best known for playing Adam on season 4 of TV series Buffy the Vampire Slayer. On his site said, “I was 6’2″ when I was 16 and 6’4″ when I got to college”.

George Hertzberg is a popular American actor who comes to the timeline shortly for his tremendous acting performance 5.4 million dollars

George Hertzberg (born November 6, 1972) is an American actor best known for his portrayal of the cyber-demonic soldier Adam in the fourth season of the television series Buffy the Vampire Slayer.
Hertzberg, who was born in Glens Falls, New York, has made appearances in several television shows, including 3rd Rock from the Sun and That’s My Bush!, and wrote and produced the movie Too Much Magic.

Below is the chart showing the comparison of George Hertzberg's height with other similar heights. The selected celebrities for comparison include Brett Eldredge, Dick Powell, Jake McDorman, Luke Bryan.