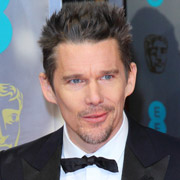 American Actor best known for roles in movies like Gattaca, Training Day, Assault on Precinct 13, White Fang, Before the Devil Knows You’re Dead and Before Sunset. In 2008 he mentioned his weight, saying “I was getting divorced and I weighed 130 pounds [59 kilograms] but I weigh about 180 pounds [82 kilograms] now.”

Ethan Hawke has nearly 90 acting credits to his name. With so many acting jobs under his belt — not to mention his writing and directing work — it’s no wonder Hawke has accumulated a high net worth to the tune of $55 million, according to Celebrity Net Worth.

Below is the chart showing the comparison of Ethan Hawke's height with other similar heights. The selected celebrities for comparison include Alastair Stewart, Charlie Weber, Elaine Cassidy, Les Dawson.