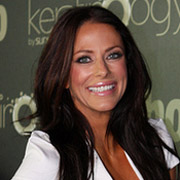 Australian actress is best known for playing Charlie Buckton on TV soap Home and Away. On her model agency she was listed as being “5’7” with measurements: Bust 34b, Waist 24 inches, Hips 34 inches and shoe size 7US.

Below is the chart showing the comparison of Esther Anderson's height with other similar heights. The selected celebrities for comparison include Tom Cavanagh, Carey Mulligan, R Kelly, Rhys Darby.