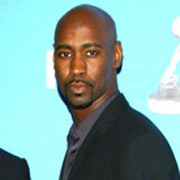 American actor, best known for playing White House Chief of Staff Wayne Palmer on TV series 24, Robin Wood on Buffy the Vampire Slayer and Amenadiel on Lucifer. On his twitter, he gave his height, saying: “I’m 6″3”

Woodside is an actor from the United States with a net worth of $4 million. D.B. Woodside was born in July 1969 in Jamaica, Queens, New York. He holds an MFA from Yale School of Drama and a BA from the State University of New York in Albany.

Below is the chart showing the comparison of DB Woodside's height with other similar heights. The selected celebrities for comparison include Jenni Baird, Tracy Spiridakos, William Baldwin, Karen Carpenter.