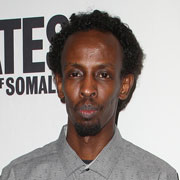 Somali-American actor, best known for roles in Captain Phillips, Eye in the Sky, Blade Runner 2049, The Pirates of Somali and The Extraordinary Journey of the Fakir. In the Chicago Tribune it mentioned “Abdi and his friends also had a physical attribute that would have been difficult for many American-born actors to match — their incredible leanness. He is 5-foot-10 and 120 pounds. ‘I’m naturally like this,’ Abdi said. ‘I eat whatever. Burgers, pasta, rice.'”

Barkhad Abdi is believed to have a net worth of $100,000. Through his major professions as an actor, film director, film producer, driver, and disc jockey, he has acquired a considerable wealth.

Below is the chart showing the comparison of Barkhad Abdi's height with other similar heights. The selected celebrities for comparison include Josephine Skriver, Kimora Lee, Nicole Gale Anderson, Jason Momoa.